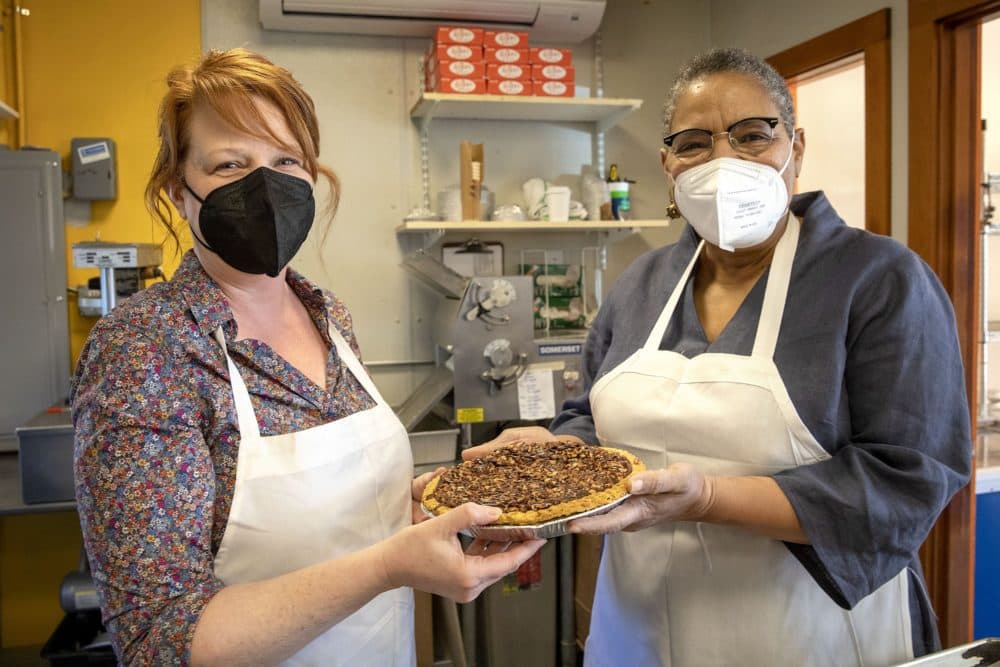 It’s Pi Day, the annual 3.14 celebration of the mathematical constant of Pi.

In normal times, a popular contest is hosted on this day by Somerville bakery and institution Petsi Pies. Over the past 15 years, memorizers young and old have lined up outside the popular neighborhood shop waiting to rattle off mathematical digits in exchange for free, miniature “cutie pies” decorated with the number 3.14.

While that party can’t happen this year due to the pandemic, the shop will still be open. However, 65-year-old founder Renee McLeod won’t be working in the kitchen this time around. She recently passed the torch (or rolling pin) to her operations manager Jill Remby, who’s been at Petsi Pies for about five years.

We thought Pi Day was the perfect excuse to talk to them both about the transition at the beloved bakery. Here are highlights from WBUR’s Andrea Shea, lightly edited for clarity.

Andrea Shea: Renee, how does it feel to not be the owner of Petsi Pies anymore?

Renee McLeod: It’s weird and wonderful. I’m really happy I was able to get it into the hands of someone who really loves it and is going to take good care of it.

Shea: What are the origins of the Pi Day celebrations here?

McLeod: I wanted to do something special for Pi Day, and my son was memorizing digits of Pi. I was trying to explain to him about Pi and that I loved math forever. He asked me, ‘Are you doing anything for Pi Day?’ and I said, ‘Well, I’ll probably put, you know, the digits on a pie or something.’

And then I thought about a contest, so he and his friends could come down and recite [the Pi digits] and maybe get prizes. So we had this contest, and there were probably 12 people here. But the next year it absolutely blew up and turned into a long line out the door. Hundreds of people wanted to recite digits and eat free pie.

Shea: Sweet. Can you tell the story behind the name of your shop?

McLeod: I’m ‘Petsi’ in my family. It has been my nickname since I was a very little kid and I just decided to name it Petsi Pies. I was supposed to be Pete, but I was a girl and it sort of evolved into Petsi.

“I was blown away with how much we could do for people here in the neighborhood who just needed some sense of normalcy.”

Shea: And Petsi Pies has become such a beloved institution since you opened it in 2003. Jill, I gather you’re not going to change the name?

Jill Remby: I’m not going to change anything, really. I have all the same staff that I worked with over the years. Some I’ve hired myself, some were here before I was. So that’s the most important thing to me — that and the recipes. I mean, we’ve painted the place, customers are going to see new stuff to add to the good, old stuff on the menu.

You know, things had already changed before this transfer took place because of the pandemic, and it’s been a really interesting experiment to see what people are really needing. When we opened our doors after we had been closed for six weeks back in May last year, I was blown away with how much we could do for people here in the neighborhood who just needed some sense of normalcy. They were coming in and asking us how we were doing and being just so happy to see a blueberry muffin or a key lime pie or a brioche.

Shea: Renee, how long have you know it was time to move on?

McLeod: Having the right person helped me know that it was time. I actually thought I was going to have to wait out the lease and just stop. But it was a blessing to have someone who was interested in doing it because it’s a lot of work. It’s not the sort of business you take over if you want to get rich, you’ve got to have a love for it. And Jill does.

Shea: Renee, when we talked in the past, you said you initially wanted to open a bakery because you thought you could save the world with pie and that pie has the power to bring people together.

McLeod: I still believe that, but I believe a lot of things can save the world and help bring people together. And Jill will continue that on. Now it’s time for me to make my life a little more about … me.

Andrea: Speaking of that, what’s next?

McLeod: I’m sewing, I’m painting. I’m doing a lot of yoga. I got a trainer on Zoom. I’m enjoying myself. I’m doing all these things I didn’t have time for before.

Shea: What’s been the hardest part about this kind of transfer of power and knowledge?

McLeod: I think the hardest part was really just letting go and knowing that it was in good hands and there’s nothing I needed to do. Jill had it. She’s got it.

Remby: We’ve been talking about this for a long time. We were ready to do the transaction months before it actually happened. So I think that was a good process for us to kind of move through the stages. I mean, there really aren’t any stages for me — I’m over the moon about this! It’s a little scary, but not really. I’ve had a lot of practice. I’ve always done the books for Renee almost since I started working for her, so there’s no surprises there. I guess the unpredictability of the pandemic and its effect on business is the worst part and that’s not even that terrible. It’s just a surprise you come into every day and never know what you’re going to find.

Shea: You must feel a big sense of responsibility because this really is such a beloved institution.

Remby: People give me a thumbs up when I drive my car which has a magnet on the side. They get excited and they wave. It’s such a privilege.

Renee built something just amazing and she touches people. We have relationships with all of our folks in the neighborhood, the people who drive here from Framingham once a month to get their scones and the people we just see for Thanksgiving. We have a loyal following and I attribute that to the good food and to visiting with Renee. Everybody knows Renee, and they’ll come in and talk to her like they’re best friends even if they just met her once. That’s just who she is. And that’s part of what this business is about. I hope I can do her the honor by carrying it forward.

“I think the hardest part was really just letting go and knowing that it was in good hands and there’s nothing I needed to do. Jill had it. She’s got it.”

Shea: People are going to be asking about how Renee is doing all the time.

Remby: I hope people will continue to ask. That’s really important. It’s not that Rene is gone. She’s still around. She’s the founder and she still visits.

McLeod: I’m right around the corner, and I come here for my iced coffee because it’s the best.

Remby: And you still have a key, and you’re going to keep it.

Shea: Petsi Pies is not just an institution, it’s also a Black-owned business – and has been for 18 years – in a town where there aren’t a lot of Black-owned businesses. I’m not going to say it’s a loss, but Renee have you reflected on what that means?

McLeod: I’ve reflected on it, but I feel like the business itself is going to keep going in the same spirit that I owned it in. People are supporting all the people who work here who are every race, and I think that’s just as important. I feel like I built something, and the fact that I’m Black is just kind of a happy circumstance of my birth. These employees from the countries that they’re from built this, and I hope our neighbors will remember that.

Shea: What are your hopes looking ahead for the future of Petsi Pies?

McLeod: I hope it just keeps getting better and better. It gets better every time I come in here. I’m excited and inspired and I think it’s beautiful and I’m so proud of the work she’s continuing because I’m not going to live forever, and especially if I if I kept baking pies I certainly wasn’t going to. I’m really happy that I was able to pass the torch to someone so competent and loving of the business.

Remby: I hope that Renee does publish that cookbook that she’s been wanting to publish. That’s in the works, and I think it’s a great culmination of everything.

Both Renee and Jill also hope to continue to fundraise for the Renee McLeod Scholarship Fund for an entrepreneurial Rindge School of Technical Arts student.